2015 was the first year I chose to adopt One Word for the year. I wrote about selecting my word—release—in a blog post last January with an update in August.

Release was not a word I chose eagerly. As a Type A personality, releasing anything does not come naturally. Okay, yes, Type A is really a euphemism for Control Freak.  But control and release are not compatible words. Something had to give. What gave is me.

The act of continuing to release my desire for control merely acknowledges the truth that control is an illusion. I’m not in control. Never have been. Never will be. I can truly say my one word for 2015 – release – made a difference in how I live and especially in how I respond to negative circumstances. And I so needed this reminder during several significantly negative situations this past year.

That doesn’t mean I’ve arrived. I can testify to the truth, “Old habits die hard.” Yet there is also a feeling of relief in release. Relief that I can stop my futile efforts and rest in the care of my sovereign heavenly Father—the One who is and has been in control all along.

I’ve considered several words that would help me grow spiritually. Serious words. Theologically significant words. Once again I asked the Lord for direction on which to select…and a simple, three-letter word, not on the list, came to mind (another opportunity to release control!). Joy. Within twenty-four hours I received four different confirmations that this is, indeed, my word for 2016.

Seems like an easy one this time, doesn’t it? Perhaps for many. But I’m usually so focused on my list of things to accomplish today, tomorrow, next week, or next month that I miss the joy of each minute now. Building on last year’s word, release, I want to take the next step in finding the joy in circumstances I would not have chosen (or cannot control!).

Now for another fun confirmation….If you flip the number 2016 vertically, it spells joie – French for joy! 😀 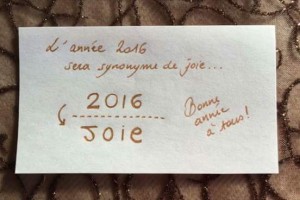 I expect 2016 will be an interesting—and joyful!—year. I’ll keep you posted!

StumbleUpon
← Prev: What Does the Future Hold? Next: For or Against ? →