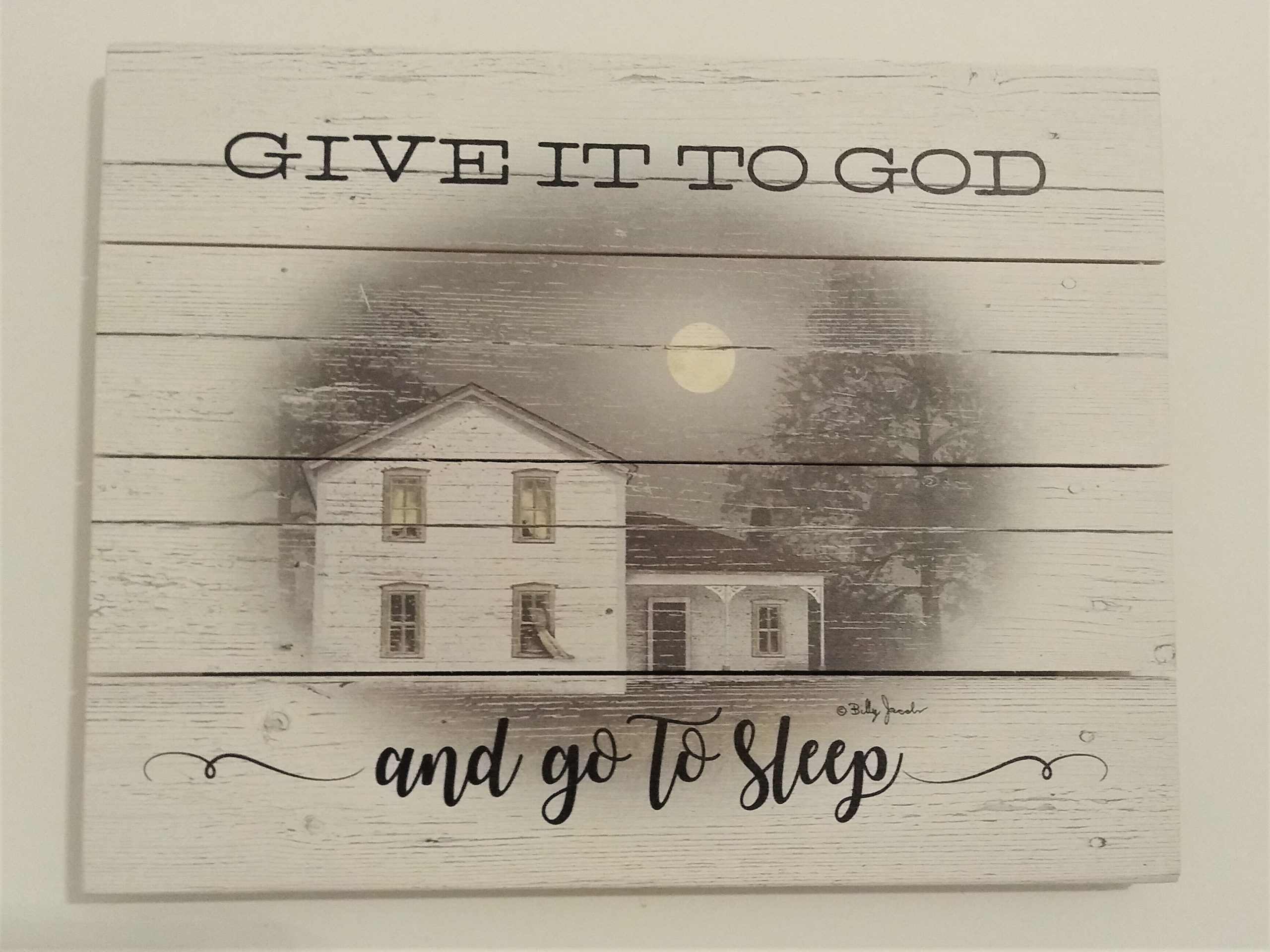 A friend recently gave me a Christmas gift with one of the best pieces of advice I’ve ever received. The wisdom that I intend to take with me into the new year is written on a sign that says:

Truth be told, the first half of the advice wasn’t new. Not only had I heard it before, I’ve given this advice to others.

“Give it to God.” Sound familiar? Maybe someone has told you something similar. It may have been “Give it to God” or perhaps “Let go and let God.”

There is no Bible verse written on my sign. Yet the concept of releasing our concerns to God is found throughout Scripture. For example:

Here’s the problem. It’s one thing to say I’ve released my worries to God. But it’s a whole ‘nother thing to actually do it. And the test to know if I’m really trusting God fully and completely?

The answer is simple: it’s when I can go to sleep.

That’s it. That’s the test. If I say I’ve given it to God, but I lie awake all night staring at the ceiling, thoughts racing, then I’m not being honest with myself.

Jesus in the boat

Remember the account of Jesus asleep in the boat in Matthew 8:23-26?

And when he got into the boat, his disciples followed him.
And behold, there arose a great storm on the sea, so that
the boat was being swamped by the waves; but he was asleep.
And they went and woke him, saying, “Save us, Lord; we are perishing.”
And he said to them, “Why are you afraid, O you of little faith?”
Then he rose and rebuked the winds and the sea, and there was a great calm.

The ultimate sign of trust in the heavenly Father: Jesus asleep as violent wind and waves threatened to capsize the boat even as experienced fishermen cowered like little children fearing for their lives. Jesus knew there was no reason to worry.

What about you and me? Are we cowering in fear? Lying awake at night? Doubting God’s goodness and care?

Or do we have the same unshakeable assurance that the One who controlled the wind and waves 2,000 years ago is still sovereign today?

If I say I have that assurance, there’s one way to prove it. As the old year closes with all its heartache and the new year begins to unfold with all its uncertainty, I will choose daily to:

← Prev: The People of Christmas: Those Who Worship Next: Courage and Wait: Out With the Old and In With a New “One Word” for 2022 →