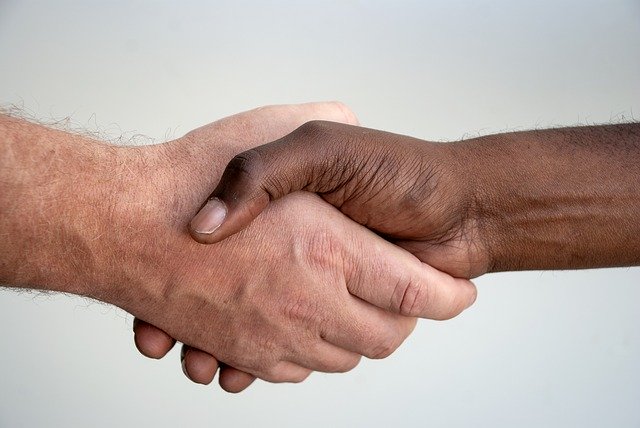 Sin is ugly. Horrific. Heartbreaking. And colorblind. It’s not white. It’s not black.

The murder of George Floyd by an abusive authority figure is sin. Ugly, gruesome sin. The perpetrator—as well as those who stood by and watched—must be charged, tried, and punished for their crime.

The looting and burning of property, as well as beating and killing of innocent people by unrestrained, violent mobs is also sin. The murders of David Dorn and Dave Patrick Underwood by mobs are just as ugly and horrific. Such lawlessness must also face the consequences.

So where does that leave us?

I can remember being taught in school that the answer to racism is to be colorblind. Don’t look at the color of the other person’s skin. Instead, remember we’re all the same under our skin. We all bleed red.

But is that the answer? Because we’re not all the same. Every person is a unique creation of God. From our DNA to our fingerprints, no one else is exactly like us. And that diversity is what enables us to complement each other. Admire each other. And support each other.

For one thing, we’re not made up of different races. We all belong to one race: the human race. A race composed of a beautiful mosaic of various ethnic groups. A mosaic that has been celebrated as diversity guarded by equal rights and protection under the law.

But is this accurate? Are our differences really celebrated and protected? Someone has described Martin Luther King, Jr. this way:

“Looted nothing. Burned nothing. Attacked no one. . . Changed the world.”

But the world hasn’t changed as much as we’d like to think. And those changes that have occurred are often more superficial than substantive in too many areas. Scratch the surface and frustration will explode like a pressure cooker with a faulty vent. And it has.

We can argue for weeks about whether or not racism is systemic. But the reality is that it doesn’t have to be systemic for people to fear for their safety and their livelihood. For example, two people I know were denied a rental apartment because they’re a mixed-race couple. And another friend was pulled over by a police officer simply because she’s a woman of color who was out late at night alone.

Of course, a violent response is wrong. But so is abuse by authority figures who are tasked with protecting the entire community, regardless of skin pigmentation. Or a derogatory comment made by a stranger on the street to another person just because they have more—or less—melanin.

Sin inhabits every human being, regardless of color.

Jesus Christ died for every human being because of that sin, regardless of color.

I’ve lost count of the number of times people have said, “If God really is a God of love, He would never send anyone to hell.” Or, “Why would God send His Son to the most torturous death possible—crucifixion—if He is a loving God?” But we forget God takes sin seriously.

And we don’t recognize our own sin, because we’re too busy proclaiming the sin of others.

Before we completely lose what’s left of our humanity, the human race—many colors, but one race—must stop judging others just because they look different.

Our culture has already sacrificed millions of babies on the altar of convenience.

We’ve sacrificed the sacred covenant of marriage on the altar of transient emotions.

And now we’ve come dangerously close to sacrificing what’s left of our humanity on the altar of our own insecurity. We assuage that insecurity to feel better about ourselves by putting others down.

Instead of demeaning anyone who appears different from us, we need to celebrate those differences. We need each other.

And that need requires us to stand up and speak up. Speak up when we see injustice. Speak up when those in authority abuse that authority. Failure to do so is also sin—a sin of omission just as serious as any sin of commission. In Luke 6:27-32, the gospel of Jesus Christ calls us to love. Love our enemies. Treat them the same way we want them to treat us.

Don’t tear down entire groups of people because of a few rotten apples, whether white or black, law enforcement or protester. Let each person be evaluated by his or her own actions rather than the actions of others who look like them or wear the same uniform.

Appreciate the mosaic that is the human race.

Acknowledge the sin that taints every member of our human race.

And remember that, apart from the gracious salvation of a holy God, we are all deserving of judgment for our own ugly, horrific sin.

StumbleUpon
← Prev: Time to Shed My Snake Skin Next: Be the Change the World Needs →