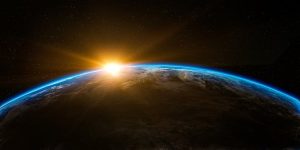 One of my favorite memories is that of my mother reading to me from a book of fairy tales. Cinderella, Ali Baba, Sleeping Beauty, and other characters came to life through the sound of her voice. As I listened to their adventures, each character seemed as real as any person I’d met.

I soon graduated to reading those tales, and others, myself. Then I moved on to more stories. Grand tales of love and adventure, of courage and sacrifice. Stories set in exotic locales with characters much more interesting than the people I talked to each day.

Trouble is, that’s how some people view all or part of the Bible: interesting stories set in exotic times and places. Stories that have a moral, but aren’t really true.

Even in some Christian circles today, it’s popular to teach that the Bible is true when it speaks of Jesus as our Savior, but that other passages, such as the book of Genesis, are merely grand stories meant to teach a lesson. For example, the creation account in Genesis couldn’t be true since “everyone” knows the universe could not have been created in six days, Noah could never have fit all the animals on the ark, and Jonah could not have been swallowed by a big fish.

Why not? As Ken Ham of Answers in Genesis is fond of saying, “How do you know? Were you there?”

While science has proposed a variety of theories to disprove biblical accounts, including creation, there has not yet been one scientific law that proves the Bible wrong. Not one. In fact, the theory of evolution contradicts the Second Law of Thermodynamics: left on its own, entropy (disorder) will increase, not decrease.

So why are many Christians reluctant to take a stand for the validity of the entire Biblical record, from Genesis 1 through Revelation 22?

Some people seem to think we simply need to teach others about Jesus Christ—that discussions about creation are unimportant. After all, whether it took six days or six million years, we’re here, aren’t we?

But it is important. If we can’t trust the literal, biblical account of creation, how can we trust the biblical accounts of anything else? If we teach others to choose the passages they want to believe in the Bible, how is that different from belief systems that combine bits and pieces of various religions to create something they are comfortable with?

The book of Genesis is as important as the gospel accounts in the Bible because it is foundational to everything else the Bible mentions. It provides detailed explanations for the basis for marriage and for the development of different people groups and cultures. It even provides a scientific explanation for the fossil record discovered by archaeologists in recent years.

Most of all, Genesis explains the reason we need a Savior. If the account of Adam and Eve in the Garden of Eden is not true, then why should we believe the rest of the Bible is true?

Some Christians try to find a happy compromise between creation and evolution. They offer a third theory for consideration: God created the world, and He used evolution as the means by which He created.

But this option slides down a slippery slope. For one thing, it can’t be reconciled with what the apostle Paul wrote in Romans 5:12 (NIV):

“Therefore, just as sin entered the world through one man, and death through sin, and in this way death came to all people, because all sinned.”

If man was created through evolution, then variations of humanity would have died millions of times before sin entered the world through Adam and Eve.

And if death did not enter due to sin, then why do we need a Savior?

← Prev: What If God Allows It? Next: Labels, Identity, & Boxes on a Piece of Paper →

In the Beginning – So What?

Talking about beginnings seems especially appropriate during the month of January. A new month. A new year. And in...

Seasons of Life, Jumping to Conclusions, and Worry

When we relocated from the northeast to Florida, one of the things we missed most was the change of seasons. Native...