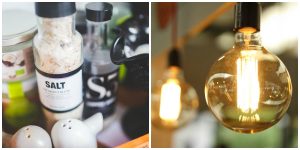 Come out and be separate.

Go out and be salty.

Which is it? Are we to be separate or salty?

As our society continues to distance itself from its Judeo-Christian roots, Christians find themselves more and more detached from the mainstream by our values. The march to secularize Christian holidays is relentless. Christian influence is diminished and frequently mocked.

The response of many believers is retreat and isolation. To protect themselves and their families from wrong influences and even temptation, believers respond by withdrawing and separating themselves. It’s a reasonable and biblical response in light of II Corinthians 6:17 (NIV), which tells us:

“‘Come out from them and be separate,’ says the Lord.”

“You are the salt of the earth. But if the salt loses its saltiness, how can it be made salty again? It is no longer good for anything, except to be thrown out and trampled underfoot.

“You are the light of the world. A town built on a hill cannot be hidden. Neither do people light a lamp and put it under a bowl. Instead they put it on its stand, and it gives light to everyone in the house. In the same way, let your light shine before others, that they may see your good deeds and glorify your Father in heaven.”

The best way to illustrate how we’re to respond might be found in the image of a boat.

Boats are made for the water. Keeping a boat on dry land may protect it from wear and damage, but every moment it’s out of the water is a moment it’s not fulfilling the purpose for which it was created.

And there’s our answer. That’s how we can apply both Bible passages. We continue to be salt and light in a culture that’s becoming more and more corrupt and dark. But we’re careful not to allow our culture to live in us or we’ll become compromised and fail to fulfill the purpose God intended for us.

So where do we draw the line? How do we know when the culture has influenced us instead of us influencing the culture?

Perhaps it’s when we spend more time trying to fit in rather than trying to stand up.

When we conform ourselves to the world’s pattern instead of being transformed by the Holy Spirit.

When our church services are more focused on being relevant than being worshipful.

Or when the saltiness of our lives becomes so bland that our friends and family no longer see a difference in us.

← Prev: Intentional Choices Next: What is Your New Normal? →