You’ve probably heard the adage attributed to Benjamin Franklin, “In this world nothing can be said to be certain, except death and taxes.”

Most of us know when Tax Day is. Every year, on or before April 15 (this year it was April 18 due to a Washington, D.C. holiday), Americans are expected to file their income tax returns with the federal government.

But do you know what Tax Freedom Day is? That’s when, according to the Tax Foundation, a policy research organization, Americans stop working for the government and start working for themselves.

This year, 2016 Tax Freedom Day occurred earlier this week on April 24th. For the first 113 days of 2016, all our income went to cover the nation’s tax burden. Beginning April 24th, we now work to pay for our own expenses.

So what does this mean for the average person? The bottom line is that Americans will spend more on taxes in 2016 than on food, clothing, and housing.

Still, as painful as it is to hand over a huge chunk of our earnings to cover taxes, all of us live every day with an even bigger debt. It’s the debt we owe to a holy God. 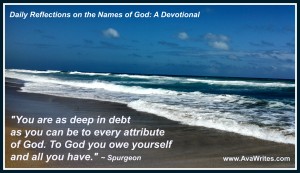 It may not be politically correct to talk about it, but a day is coming when an accounting must be given. It’s described in the book of Revelation this way:

“I saw the dead, great and small, standing before the throne, and books were opened. Another book was opened, which is the book of life. The dead were judged according to what they had done as recorded in the books” (Revelation 20:12).

But God did an amazing thing. He arranged to have our debt to Him paid in full. No lingering fees. No interest. No leftover balances.

Still, there’s a two-part catch. First, we have to admit the debt exists. Second, we have to abide by the payment terms established by the One to whom the debt is owed.

The resulting freedom is greater than any Tax Freedom Day. It’s the freedom that comes from knowing we are no longer slaves to the crushing burden of sin. Instead we belong to the One who loves us so much He did not hold back even His own Son on our behalf.

← Prev: When a Touch Up Isn't Enough Next: Suicide Highs Result From New Lows →