Suicide has been called a permanent solution to temporary problems. And it’s a permanent solution that’s increasing in almost every age group in our nation. According to data recently released by the Centers for Disease Control and Prevention, the suicide rate in the United States is at a 30-year high:

This bleak picture ended on a more alarming note than it started. The suicide rate rose 24% in the past 15 years alone.

But suicide doesn’t only affect the individual who takes this action. It breaks the heart of those who love him or her…and the darkness spreads. 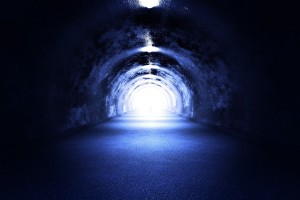 Why suicide? Many experts pontificate about a broken heath care system. The need for better screening of suicidal tendencies. The need for more suicide prevention programs. Better intervention for drug and alcohol abusers, a lifestyle of long-term suicidal behavior.

Our health care system is, indeed, broken. Blame the government, Big Pharma or greedy health insurance companies. Blame them all, and you’d still be missing the root cause.

The real problem is not a broken health care system. The problem is a broken, sin-sick world.

A world in which we teach children they are a biological accident—the result of evolution from primordial ooze to biped mammals.

A world in which people search for the meaning of life while denying the Lord who provides the meaning for which they search.

A world in which we teach adults that moral standards are relative—what’s right for you may not be right for me.

A world in which there is no accountability to a Creator—which then eliminates the need for a Savior.

Instead, people are trapped in despair and end their lives without ever knowing the unconditional love for which they’re so desperate.

Without knowing the sweet satisfaction of fulfilling the purpose for which they were created.

Without experiencing the heights of true hope because they’re drowning in the depths of hopelessness.

I’m not belittling the need for better health care for suicide prevention. Physical triggers such as a chemical imbalance may be treated to prevent or mitigate depression that leads to suicidal thoughts.

I just wish we wouldn’t ignore the most effective prevention of all: an intimate relationship with the One who knows us better than we know ourselves. He offers us not only what we need to feel better, but what we need to be whole.

If you or someone you know is thinking about suicide, please call the Suicide Prevention Hotline [1-800-273-TALK (8255)] and also visit Thinking About Suicide for resources that will meet you where you are.