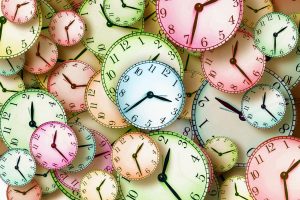 I have a love-hate relationship with clocks.

When I was a child, my parents always set our clocks five minutes fast, supposedly to help prevent us from being late to appointments.

It never worked. We were always late…to everything.

Despite the ineffectiveness of the practice, I carried it over into my marriage. For forty years, all our clocks were five minutes faster than the actual time.

It didn’t work for us, either. We were usually late to most appointments, much to my husband’s chagrin…which should tell you whose fault it was. Punctuality was my nemesis.

Daylight Savings Time (DST) ended this past Sunday. A day on which we were all required to turn our clocks back one hour. 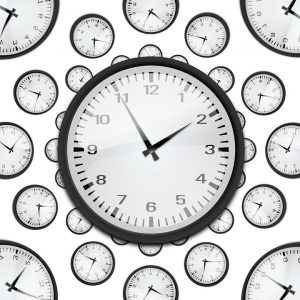 Since I’ve begun a new season of life and I was changing all my clocks anyway, I decided it was time for a fresh start. So I set all my timepieces to the accurate time…and in the process, broke a sixty-year-old habit.

Then I posted about it on social media.

The response floored me. It seems I’m not the only one to set clocks faster to help me be on time.

And I’m not the only one for whom the practice has failed.

So what’s causing all these punctuality failures?

Is it because we’ve been conditioned to fill—or overfill—every minute with activity? For many of us, down time is a rare and foreign experience. We feel guilty if we’re not constantly on the go. If I have an open hour, my first question is, “What am I forgetting to do?”

Or perhaps we’ve become so self-centered that we think the world revolves around us and our convenience? One friend commented on my social media post, recalling a poem that changed her perspective…and her habits:

Her little poem is not only painfully convicting, it’s also biblical. Philippians 2:3-4 says, “Do nothing from selfish ambition or conceit, but in humility count others more significant than yourselves. Let each of you look not only to his own interests, but also to the interests of others” (ESV). When I’m late, I’m guilty of putting my own interests above others.

Maybe our tardiness is because, as another friend noted, “Optimists are usually the late ones. We anticipate everything going perfectly door to door.” Guilty as charged. Of course, we all know it’s a rare day when everything goes perfectly!

One cousin noted being tardy is in our family’s genes. While history supports her conclusion, I’m determined to change our family’s reputation.

It’s only been five days, but so far, so good!

What tips do you have for being punctual?

← Prev: Fall Colors in Nature and in Us Next: How Current is Your Thankfulness? →