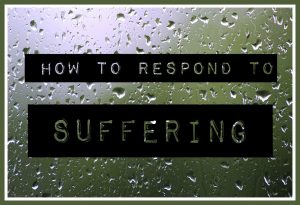 Suffering is hard. So we work just as hard—if not harder—to avoid it. We don’t want to talk about it. And we run away from it. We devise detours that often end up causing even more complications.

Of course, no one wants to suffer. It’s even more difficult when we have to watch a loved one suffer. But the reality is that suffering is guaranteed for Christians.

The timing and degree of suffering may vary. Still, the one constant is that in this broken world, suffering is an experience few, if any, escape.

Our aversion to viewing suffering was especially evident in the response to the recent release of two movies. I Can Only Imagine and Paul, Apostle of Christ were released within a week of each other this spring.

Both movies have strong Christian themes, however one brought in box office receipts of more than $79 million to date, while the other grossed $17 million. The casts of both include well-known actors. One movie is based on a popular song. The other depicts the suffering of early Christians and the end of the apostle Paul’s earthly life.

Both movies also included a measure of suffering. And both ended with the death of a main character. But I Can Only Imagine had a happy ending, while the characters in Paul would experience their happy ending only when they reached heaven.

I wonder if the significant difference in box office receipts is related to the level of suffering depicted in each movie.

We have choices in how we respond to suffering. And some choices are more biblical than others.

Our natural tendency is to run from suffering as fast as we can. But this habit can develop into a lifestyle of hedonism: the pursuit of pleasure and self-indulgence. A hedonistic life values pleasure above all else. When experiences become inconvenient or unpleasant, our overriding focus is to escape as quickly as possible, regardless of the cost.

At the other extreme is masochism. A masochist actually finds pleasure in their own pain. Not only do they not avoid suffering, they seek it and relish it when it occurs.

While you may not know many people who are masochists, most of us know people who like to wallow in their suffering. Their lives are a continual pity party and their motto is “Woe is me” as they seek a steady stream of sympathy.

While the Bible gives us a lot of information about responding to painful circumstances, it never calls Christians to be masochistic. We are not to delight in suffering for suffering’s sake.

But there’s one more response to suffering—a response every Christian is called to have:

Christians are called to walk through suffering. The Bible describes us what that looks like:

Jesus told His followers they are blessed when they are persecuted for righteousness (Matthew 5:10). Suffering and trials will come (John 16:33).

The apostle Paul tells us that suffering develops empathy. We are able to take the comfort we received and in turn, comfort others (II Corinthians 1:4).

Paul also notes that suffering and affliction produces a glory than enables us to maintain an eternal perspective (II Corinthians 4:17).  It’s easy to focus on the present when we’re hurting. But this life is not all there is.

Paul reminds us that Christians are not called to suffer alone. We are to help each other, bearing each other’s burdens whenever possible (Galatians 6:2).

The writer of the book of Hebrews notes that sometimes pain and hardship occur as a result of the Lord’s loving discipline (Hebrews 12:5-7). C.S. Lewis once said, “God whispers to us in our pleasures, speaks in our consciences, but shouts in our pains. It is his megaphone to rouse a deaf world.” Are we listening?

James wrote that we should count it as joy when we undergo trials. Not masochistic joy for the trial, but joy because we know the testing of our faith produces perseverance or endurance (James 1:2-4).

Peter tells us that while good deeds may cause suffering, we should not stop doing good just because life becomes difficult or painful (I Peter 3:17; 4:19).

As a 21st century, Western Christian, the concept of suffering, especially suffering for my faith, is fairly removed from my day to day experience. But early Christians (as well as contemporary Christians in other countries) knew what it was to live in fear for their lives simply because they self-identified as followers of Jesus Christ.

Going back to the two movies I mentioned earlier, when I watched Paul, Apostle of Christ, I was struck by a reminder. I owe a huge debt of gratitude to those early Christians who suffered for Christ as they passed the baton of faith to the next generation.

When it’s my turn, I pray I will follow their example.

How do you respond to suffering?

← Prev: Forgiveness : What Are We Really Forgiving? Next: God Wink →