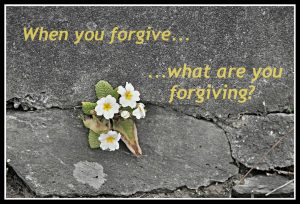 What’s one of the most common reasons we give for not forgiving others?

If you’re like many people, you might have answered that our forgiveness implies approval or tolerance of the behavior.

We read about it, talk about it, and teach it. Yet for most of us, forgiving others is one of the most difficult things we can do.

A recent conversation with a friend reminded me that one reason we may find it difficult to forgive is because we misunderstand what it is that we’re forgiving.

What if I told you we are not forgiving the sin?

Remember what David wrote in the Psalms? “Against you, you only, have I sinned and done what is evil in your sight, so that you may be justified in your words and blameless in your judgment” (Psalm 51:4 ESV).

Even the Pharisees of Jesus’ day understood that God alone can forgive sin. That’s why they pitched a fit when Jesus proclaimed the forgiveness of sins. In Luke 5:18-25 (ESV), we read:

And behold, some men were bringing on a bed a man who was paralyzed, and they were seeking to bring him in and lay him before Jesus, but finding no way to bring him in, because of the crowd, they went up on the roof and let him down with his bed through the tiles into the midst before Jesus.

And when he saw their faith, he said, “Man, your sins are forgiven you.”

And the scribes and the Pharisees began to question, saying, “Who is this who speaks blasphemies? Who can forgive sins but God alone?”

When Jesus perceived their thoughts, he answered them, “Why do you question in your hearts? Which is easier, to say, ‘Your sins are forgiven you,’ or to say, ‘Rise and walk’? But that you may know that the Son of Man has authority on earth to forgive sins”—he said to the man who was paralyzed—“I say to you, rise, pick up your bed and go home.” And immediately he rose up before them and picked up what he had been lying on and went home, glorifying God.

Yes, only God can forgive the actual sin. And since Jesus is God, He demonstrated that He also has the authority to forgive sin.

Perhaps that’s one reason we struggle with forgiveness. We’re trying—and failing—to forgive something that we don’t have the right to forgive. We justify our failure to forgive by saying we don’t want to communicate a tolerance for the sin. Or that it’s not right for the other person to “get away with” what they’ve done.

So where does that leave you and me? If we’re not forgiving the sin, then what are we forgiving?

Consider that we are forgiving the offense. The offense against our rights. Against our values. Or our family. Against whatever it is that we hold dear.

Could it be that the act of forgiveness is the ultimate act of admitting that I am not God? That in giving up my right to be angry and resentful, I am submitting to the authority God has to forgive sins?

Could it be that when we forgive others, we’re admitting an awareness that we are desperately in need of the same forgiveness? Because, let’s face it, it’s just about impossible to go through life without giving offense, whether intentionally or unintentionally. Sooner or later, we will need others to forgive our offenses against them.

There’s a freedom in forgiving others. Freedom in knowing God is God and we are not. Most of all, freedom in offering what we, ourselves, need.

What are your thoughts?

← Prev: Aging Gracefully . . . and Biblically Next: How to Respond to Suffering →