I’m weary. Worn out. Battle-fatigued by the relentless drumbeat of bad news.

I’m reminded of the 60s musical, Stop the World—I Want to Get Off. Problem is, it doesn’t stop….and I can’t get off. 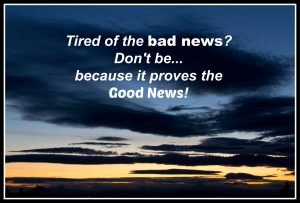 This may sound strange, but that’s actually good news. The bad news proves the good news really is the Good News.

As if these things will stop the hatred and the violence and the racism that flow from people’s hearts and minds. One friend recently posted, “I basically believe people are good.” It would be nice if she were right. But one look at our world spinning out of control proves her wrong.

All too often, people have developed their own solutions to stop the bad news. In fact, they’ll consider anything except the one answer that has stood for 2,000 years. They’ll consider every option other than the gospel of Jesus.

Did you know that “gospel” literally means “good news”? And here’s the gospel in its simplest form:

Sin separates us from God.

Yes, I know that sounds like more bad news. But if we don’t acknowledge the bad news, how will we recognize the good news? Besides, do we really need more proof that our hearts are not basically good?

There’s only one way to pay for our sin and be restored to our Creator.

The world doesn’t like the name Jesus. Sadly, His name is often used as a curse word. But the sacrifice of Jesus as a substitute for you and me is the only way God arranged for our sins to be paid for and forgiven. Jesus said it Himself, “I am the way, the truth, and the life. No one comes to the Father except through me.” He’s the only way because He is the only one who was both holy God and perfect man.

We must make it personal.

Of course, yes, I grew up in church.

That’s good for you, if you need it.

It’s not enough to believe…if by belief, you mean the same thing as believing that George Washington or Abraham Lincoln existed in history, too.

It’s also not enough to grow up in church. Attending church doesn’t make you a Christian any more than sitting in a garage makes you a car.

And it’s not enough to encourage someone else to believe if they need it…because we all need it.

Tired of the evening news? Looking to stop the hatred? Weary of all the failed solutions? Receive the solution offered by God Himself. It’s the only one that works.

The bad news really does prove the good news…and that’s the best news of all.

StumbleUpon
← Prev: Prisoner of Hope Next: Did the Solar Eclipse Change You? →

The People of Christmas: The Outsiders   Filthy. Smelly. Not fit for decent society. Outsiders. Otherwise known...

Veteran’s Day, Armed Forces Day, Memorial Day: What’s the Difference and Why Should We Care?

The Difference Between Veterans Day, Memorial Day, and Armed Forces Day   It seems there’s a holiday for...