When I first began writing, I wondered how to answer the question, “What do you do?”

So I sometimes wonder why I feel the need to preface my writing with the label, Christian.

Maybe it’s because the majority of my writing is published by publishers affiliated with the Association for Christian Retail, formerly known as the Christian Booksellers Association (CBA).

But not all my writing targets the Christian market. I’ve written newspaper articles as well as stories for anthologies such as Chicken Soup for the Soul.

It’s kind of funny. Just because a plumber installs a water heater in a church, he doesn’t generally self-identify as a Christian plumber. As I already mentioned, I never identified myself as a Christian executive.

Which brings me to the question of Christian companies. Does a company have to publicly self-identify as Christian to express Christian values? Companies such as Hobby Lobby and Chick-Fil-A have been in the news because they have publicly identified their Christian values.

Recently, Dutch Brothers Coffee was in the news. Nothing in their corporate pages indicates a Christian heritage. Yet their employees were “caught” praying with a woman who was a recent widow. And it wasn’t the only time Dutch Brothers employees lived out the company’s Creed. 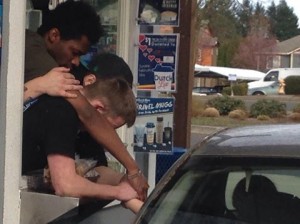 Does it matter that the company is not identified publicly as a Christian company? If they are Christian, then terrific. If they’re not, then they’re shaming every one of us who fail to live out our belief in Christ, whether at work or at home.

The result would be that everything we do is done for the glory of God. We would honor Christ in every area of our life.

We would see a lot more heartwarming photos of people treating each other in obedience to Mark 12:31 (NIV): “Love your neighbor as yourself.”

We would see people living out Matthew 5:16 (NIV): “In the same way, let your light shine before others, that they may see your good deeds and glorify your Father in heaven.”

We would see people being what they label themselves.

What are your thoughts?

← Prev: Be Bear Aware, Don’t Put a Baby Bison in Your Car, and Other Wisdom Next: Four Benefits of the Best Kind of Honeymoon →