Once again, in the face of evil unleashed on the unsuspecting, God is being mocked.

This time the source of mockery is a 96-year-old bastion of journalism, The Daily News, based in New York City. 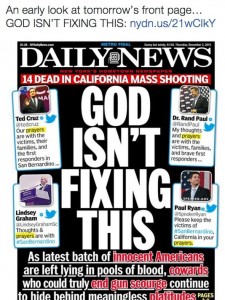 In response to the tragic shooting in San Bernardino, many public figures, including an array of politicians, have been quoted as saying some variation of, “Our prayers are with the victims and their families.”

In an apparently politically motivated attack, the front page of the December 3rd Daily News trumpets, “God Isn’t Fixing This” as it derides these politicians with their quotes about prayer. In the process, they have also ridiculed every Christian who believes not only in the power of prayer, but in a sovereign God who is in control of the events of history.

While it appears our sin-sick world is about as far from God as can possibly be, the truth is, creation is still accountable to its Creator. Someday, Jesus—the One who came as the Lamb of God and died to redeem humanity—will return as the victorious Lion of Judah.

Our difficulty is that, from our perspective, He can’t come soon enough. We see sin and suffering multiply and corrupt everything around us. We witness the indiscriminate loss of lives, whether babies still in the womb or volunteers at a non-profit Christmas party. We ache for those hurt by broken marriages and families. And even as Christians, we find ourselves longing for God’s timetable to move just a bit faster.

But as someone once said, “faith in God includes faith in His timing.” God is still in control. The Bible tells us “The Lord is not slow in keeping his promise, as some understand slowness. Instead he is patient with you, not wanting anyone to perish, but everyone to come to repentance” (II Peter 3:9 NIV).

In the wake of the San Bernardino shooting, I’m reminded of the words of the beautiful Christmas hymn, “I Heard the Bells on Christmas Day,” written by Henry Wadsworth Longfellow. Two verses in particular seem especially relevant today:

Then pealed the bells more loud and deep:
“God is not dead, nor doth he sleep;
The wrong shall fail, the right prevail,
With peace on earth, good will to men.”

Sing these words with the assurance that God is indeed not dead and does not sleep. And with all due respect to the Daily News, I would add one more word to their headline: God isn’t fixing this…yet. Someday, Jesus will return and evil will be conquered once and for all. The bigger question is, will you be ready?

Stumbleupon
← Prev: A Month of Thanksgiving Next: Two Wrongs Don't Make a Right → 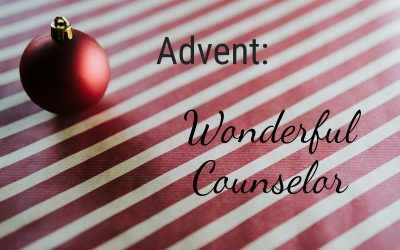