The mere mention of the word causes my jaw to clench and the knot in my stomach to tighten. Memories flood back, unbidden. Resentment for things I’ve given to the Lord a hundred times begins to wrap its tentacles around my heart again.

Once more, I make a choice. I will not hold a grudge. I’ve forgiven that person. Life is fleeting—a mist that’s here one day and gone the next (James 4:14). I don’t want to waste even one minute in voluntary captivity to anger and bitterness that would permeate every area of my life if I let it.

Still, it’s easier to recognize this destructive tendency in others than it is to kick my own angry thoughts to the curb. Forgiving is hard. When the thoughts return—and they do—I have to make an intentional choice to forgive and move on. Every time. Again and again. No exceptions. 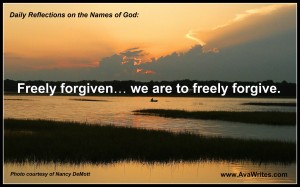 The world tells us we have a right to be angry. Sometimes even well-meaning Christians tell us abusive parents, backstabbing coworkers, and cheating spouses deserve to burn in hell and let’s give them a taste of that punishment right now.

Let Me deal with that person.
Let Me heal your wounds.
If My Son was not spared the pain of betrayal, why should you be spared?

For my own peace of mind and spiritual growth.

Most of all, I release it because of the great forgiveness God extends to me through the cross of Christ. No one will ever require as much forgiveness from me as I require from God.

My days are numbered. I don’t want to waste a single one carrying a grudge.