You may not know who she is, but you’re probably familiar with her work. One of her favorite words is “Aack!” and her last installment will circulate October 3, 2010. Have you guessed yet? 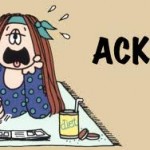 Cathy Guisewite wrote a popular comic strip called “Cathy,” whose namesake was an iconic, single career woman. We cheered her on as she battled her unreasonable boss and sympathized as she clashed with her mother. We sighed as she searched for true love and empathized as she fought the battle of the bulge. Those four basic guilt groups were a recurring theme: food, love, mom, and work.

We saw ourselves in the funny pages.

And this simple comic strip brims with lessons for those of us who are teachers and writers.

I really do want to write like Cathy Guisewite. Not that my goal is to create a successful comic strip, although that sounds like fun. No, I want to teach and write in a way that connects with my readers—intentionally and intimately.

“I’ve had women hug me with tears rolling down their faces and tell me how reading the strip helped them through horrible, lonely times in the exact same way that writing the strip helped me. The women who have shared that with
me have changed my life. I’ve gone home so inspired.”

One reason for this strong connection is that she wrote transparently and authentically. As Guisewite admits, 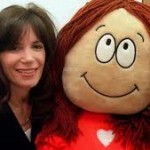 “Pretty much, the more humiliating the admission, the more autobiographical it was. The seven different sizes of jeans in one closet…the three-year, $75./month membership to the gym that I went to twice…the begging my mother to return the delusional New Year’s Eve outfit because I couldn’t face the saleslady again: all me.”

Transparency and authenticity. I need both if I truly want to meet my readers where they live. I need to climb down from my ivory tower and be willing to bare the parts of my life that demonstrate my imperfect humanity.

I may be embarrassed by some of these “Aack” moments, but if I pretend they don’t exist, then I’m pretending to be someone I’m not – someone who has it all together all the time. The reality is that Jesus Christ is the One who holds me all together. Without Him, I’d be falling apart.

I love this process of learning and growing and teaching and writing. It’s a wonderful adventure, and the greatest lessons often come from life’s “Aack” experiences. Let’s learn from each other.

In what way are you being called to a greater level of transparency and authenticity in your relationships with others?
How can you encourage others in their journey to be “real”?

← Prev: Fact or Fiction? Next: The Croquet Lesson →