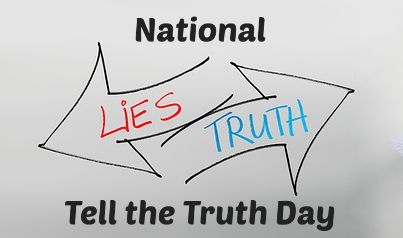 Has telling the truth become an exception? Or is it simply entertaining? The television program, To Tell the Truth, is based on the premise that contestants can’t determine which of four panel members is lying. In the classic comedy, Liar, Liar, Jim Carey plays an attorney forced to tell the truth for 24 hours as a result of his son’s wish. Even Hallmark offers a Christmas movie about a woman who, as a result of her niece’s wish, is also forced to tell the truth.

There was a time when a person’s reputation was as good as his word. Truth-telling seems to have lost its prestige. It’s so unusual to tell the truth in our culture that we now have one day set aside to do just that. July 7 is National Tell the Truth Day. On this day, every American is challenged to go a full day without telling a lie or saying something misleading or dishonest.

Imagine that. One day set aside out of 365 for telling the truth.

Before we shake our heads or roll our eyes, perhaps we should start by being honest with ourselves. How often have we justified telling less than the absolute truth as a charitable act? We don’t want to hurt someone’s feelings, so a lie becomes an easy way out to not share our opinion of someone’s new haircut or their singing talent.

Sometimes the truth is just plain inconvenient. How many times have we had a family member answer the phone with “She’s not here” while we stood three feet away? Or made a sick-call to work so we could spend the day at the beach? Perhaps we’ve been less than forthright about the reason for that missed contract deadline or failure to prepare for a class.

The Truth About Lying

Lying is one of those sins in the Bible that has somehow worked its way to respectable status in our culture. A lie isn’t a lie anymore, it’s a fib, white lie, half-truth, untruth, falsehood, tale, story, or pretense—just to name a few synonyms. We equivocate, mislead, misstate, misrepresent, prevaricate, feign, and even engage in “spin control.”

As if dressing up a lie with another name changes its nature.

Then there’s the problem of “your truth vs. my truth.” Is it possible for truth to be relative? Some would like to believe so. But since truth is defined as fact, truth is a function of reality, not perception.

Todays culture sounds a lot like ancient Israel in the days of the prophet Jeremiah. “‘Lies and not truth prevail in the land…they do not know Me’, declares the Lord” (Jeremiah 9:3).

Not only does He desire truth for us, He instructs us in the benefits of truth throughout the book of Proverbs. Truthful lips are established forever (Proverbs 12:19), and the one who listens to the truth will speak forever (Proverbs 21:28).

Surely we don’t have to wait for a National Tell the Truth Day to be honest. Let’s purpose to tell the truth…today, and every day

English novelist Eric Arthur Blair, better known as George Orwell, once said, “During times of universal deceit, telling the truth becomes a revolutionary act.” This is one revolutionary act we can all support . . . and that’s no lie!

StumbleUpon
← Prev: How Do You Wait? Next: Ordinary vs. Extraordinary →

How Do You Celebrate Palm Sunday?

How Do You Celebrate Palm Sunday?   Hosanna! Blessed is he who comes in the name of the Lord! The crowds cheered....