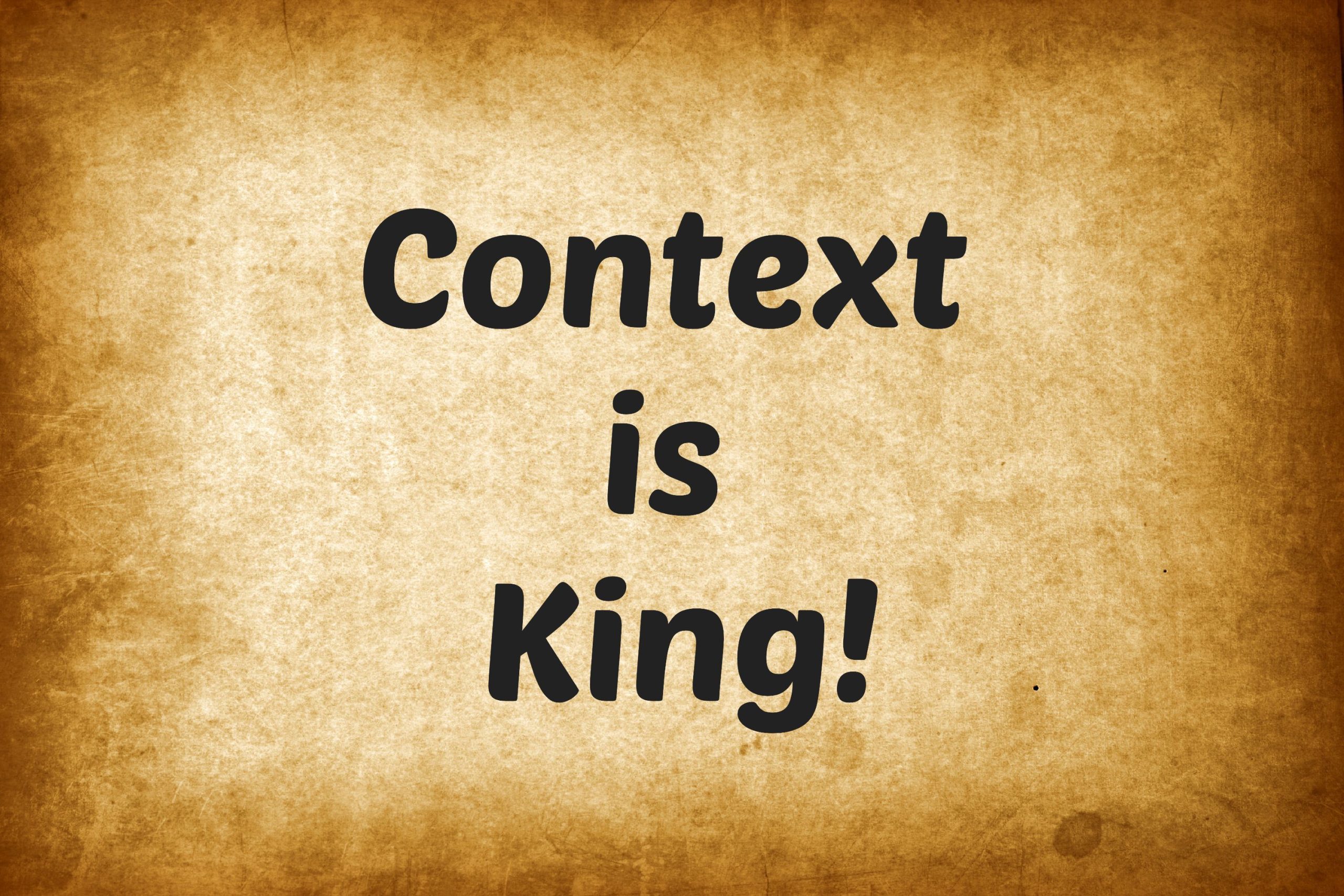 One of my favorite scenes from The Princess Bride includes a conversation between a character named Inigo Montoya and the arch-villain. Montoya spends much of the story listening to the arch-villain repeatedly use the word inconceivable. But each time he said it, what was supposedly “inconceivable” actually occurred. Montoya finally observed, “You keep using that word. I do not think it means what you think it means.”

Which brings me to the Bible. Too often, verses are quoted out of context and assigned a meaning that differs from the original intent. One of the basic guidelines in interpreting Scripture is “context is king.” When verses are taken out of context, I struggle against the urge to say, “You keep using that interpretation. I do not think it means what you think it means.”

You may have heard the story about a young man searching for direction. He opened his Bible to Matthew 27:5 and the second half of the verse caught his eye: Judas “went away and hanged himself.” Well, that didn’t seem helpful, so he flipped open his Bible again and this time the pages fell open to Luke 10:37. The end of that verse said: “Jesus told him, “Go and do likewise.”

We can roll our eyes at this story, knowing that seeking direction by taking those verses out of context is not wise at all. If only we were as careful about other verses we take out of context.

Theologians often cite the phrase, “Context is king,” when attempting to understand what the Bible says. “Context is king” is a pithy statement which helps us remember meaning is determined, not only by a particular phrase or verse, but also by the context of that verse.

If we remember “context is king,” we may avoid common mistakes of misinterpretation. For example:

I’ve heard this verse quoted as an encouraging promise for believers, especially as they proceed in serving the Lord. It’s a wonderful thought, isn’t it? But if you ask family members of martyred Christians in Nigeria, they’ll be the first to tell you the verse is referring to something other than physical weapons.

Of course, there is a truth in this verse that applies to all believers. That truth is the assurance that while physical suffering and harm may come to us in this life, God seals His children spiritually for eternity with Him.

Jeremiah 29:11 (NAS) – “For I know the plans that I have for you, declares the Lord, ‘plans for welfare and not for calamity to give you a future and a hope.”

This has always been a favorite verse among Christians seeking assurance of God’s leading. While the promise of God’s care is true for all Christians, this particular verse is specifically directed to ancient Israel. Chapter 29 of Jeremiah is a message to the exiles whom Nebuchadnezzar had taken captive to Babylon.

The previous verse speaks of the seventy-year term of the exile and God’s promise to bring them back to their land. Verse 11 continues with more information regarding God’s intent for His people at the end of their exile.

Philippians 3:13b-14a (NAS) – “forgetting what lies behind, and reaching forward to what lies ahead, I press on toward the goal…”

This verse is often quoted as an admonition to believers to stop allowing memories of past failures discourage us. Confess the sin, don’t look back, and move ahead!

But if we examine the context of the verse, we find the apostle Paul wrote this chapter of Philippians to warn against confidence in our own accomplishments and successes. As he says in verse 8, “I count them but rubbish in order that I may gain Christ.” In verse 9, Paul explains that his own righteousness is not acceptable, but only the righteousness of Christ which comes by faith.

Of course, we should stop allowing memories of past failures to discourage us, as well!

These are just three examples of verses that are often misinterpreted because they are taken out of context. God’s Word holds a multitude of promises for His people. It’s up to us to accurately handle the word of truth (2 Timothy 2:15)!

What Bible verses have you been tempted to take out of context?

Has Your Heart Caught Up to Scripture?

Catch Up to Scripture   A friend recently shared a tender prayer request, then closed our conversation by saying,...