Thirty-five years ago, I stopped a pickpocket. It happened on Nassau Street in lower Manhattan as I watched a man match his stride with a woman in front of him. When he was close enough, he reached into her side coat pocket from behind and lifted out her wallet.

She was clearly oblivious to what was happening, so I said something. Actually, I shouted something. It wasn’t very profound. More on the order of, “Hey, you! That’s not yours! Give it back!”

The victim stopped and turned around. The thief did the same. Then he called out something I’ll never forget. “Mind your own business!”

That’s right. He chastised me for interfering with his “business.”

I had forgotten about that incident until recently. Before I canceled my landline I received a steady stream of scammer calls. You know, the ones where someone calls from “Windows” and says they’ve seen “suspicious activity” on your computer…and then they offer to help.

The frequency of these calls was beyond annoying. No matter what I said or did, I couldn’t stop them. So I confess to having a little fun at their expense. If I couldn’t stop the calls, it gave me a tiny bit of satisfaction to cause them grief, too. So I might have pretended to be deaf and make them repeat themselves umpteen times before I hung up. Or I might have feigned cluelessness about owning a computer, so how could they have received notification of suspicious activity?

But one call stands out from all the others. The scammer call came (again) and I messed with the caller (again). This time his response left me speechless…and reminded me of the pickpocket from thirty-five years ago. When he realized I wasn’t falling for his line, he chastised me for wasting his time! He had called me for fraudulent purposes, intending to scam me, yet he had the nerve to say I’m wasting his time?

Clearly the pickpocket and the scammer both subscribed to the philosophy, “The best defense is a good offense.”

Then I thought of how I often respond when I’m under the Holy Spirit’s conviction. Yup. The best defense is a good offense.

My best defense is my only defense. His name is Jesus.

StumbleUpon
← Prev: Filling the Silence and Drowning Out the Voice of God Next: Nine Misconceptions of Love →

The Christian Walk   Have you ever walked with small children? Hand in hand, they keep up with you by taking two... 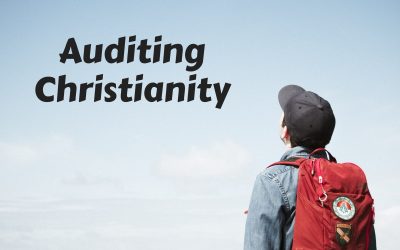 Auditing Christianity   As the traditional school year winds down, the next month or two will find most students...