Motivated by a desire to be good citizens, many of us have taken an active interest in the welfare of our country. We’ve participated in the political process. We’ve supported candidates we thought would lead this nation according to godly principles.

But no matter who you identify with—right or left, conservative or progressive, republican or democrat—it doesn’t matter. Right now, we all feel betrayed because every candidate for president is fatally flawed.

What’s a Christian to do?

Perhaps the first thing we need to do is evaluate why we’re feeling so betrayed. 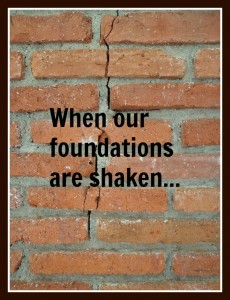 Why is the depth of our disappointment causing normally civil people to spew uncivil comments about the supposed “enemy” in public forums?

Why are we desperately trying to justify the support of equally blemished candidates?

Why are we so divided among ourselves that we bear no resemblance to Jesus’s request to the Father “that they may all be one, just as you, Father, are in me, and I in you, that they also may be in us, so that the world may believe that you have sent me” (John 17:21 ESV).

Then we wonder why the world doesn’t believe that the Father sent the Son. The reason is as close as the nearest mirror.

When did we fall for the lie that the answer to our nation’s troubles is found in a politician or political party? Or that the victory of “our” political party is of utmost priority?

Regardless of who wins in November, Christ is still the King of kings and the Lord of lords.

Regardless of who wins in November, this nation will continue for as long—or as short—as the Lord wills it.

Regardless of who wins in November, our culture will grow increasingly hostile to Christianity. Christians in other countries shake their head at what we call persecution, knowing we have yet to experience the real thing.

We have been commanded to be salt and light in a corrupt and dark world. “But if salt has lost its taste, how shall its saltiness be restored? It is no longer good for anything except to be thrown out and trampled under people’s feet” (Matthew 5:13 ESV).

How sad that in social media and public arguments, Christians have, indeed lost their saltiness. There is often little or no difference between comments made by Christians and those made by unbelievers in attacking the opposition. Name-calling, vulgarities, and false statements abound…by Christians! “From the same mouth come blessing and cursing….these things ought not to be so” (James 3:10 ESV).

It would be nice if we had ideal candidates to vote for in this, or any, election. But we live in a broken world that is getting worse, not better. There isn’t a candidate alive who can stop the downward spiral. Perhaps God has allowed the current pool of fatally flawed candidates to shake our faulty foundations and remind us the solution to our problems will never be found in human government.

If we forget who we are and whose we are when our foundations are shaken, then shame on us. Of course, we need to do our homework and support candidates who best reflect our values. But if we forget our identity in the political process, then even if our candidate wins, we will still lose. And no candidate can ever fix that.