One of my favorite Christmas movies is The Bells of St. Mary’s. A friend recently reminded me of the movie when we were talking about a major prayer request for the Bible study class I teach. We need more available parking, and she suggested (tongue in cheek!) we pray that nearby businesses would give us their parking lots. If you’ve seen the movie, you’ll understand the reference. And if you haven’t, you’re missing a treat!

But today I’m thinking about a different scene from the same movie. A student is assigned to write an essay about the five senses. Patsy is stymied until, with a little assistance from Father O’Malley, she writes about a sixth sense: common sense. In her words:

“We see others, we hear others, we know others with our five senses. But how do we really know ourselves? Through our common sense. Common sense is an internal sense. Its function is to differentiate between the various reports of the senses, or to reduce these reports to the unity of a common perception.”

Heavy words for a fourteen-year-old girl. But her essay spoke truth. Sad to say, our culture could use a dose of her common sense today.

Self-identification is a popular (or unpopular, depending on your position) term these days. People self-identify with what they are not, disregarding reality in favor of perception. Our culture has given new meaning to the phrase, “perception is reality.” In the process, common sense has died. 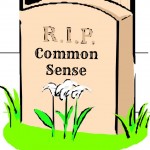 We are losing the ability to “differentiate…the various reports of the senses.” We no longer have a “unity of common perception.” Never mind the need to establish morals and values on the Bible. The Bible has been dismissed as irrelevant. But according to our society, we can no longer trust even our five senses to inform us of reality.

This leaves us in a culture best described in the same Bible our culture rejects:

“All the people did whatever seemed right in their own eyes.” (Judges 17:6 NLT).

No matter how much an individual self-identifies, and no matter how strongly one wishes to disregard reality, truth is still truth. I’m reminded of Hans Christian Andersen’s short story, “The Emperor’s New Clothes.”

In this story, the emperor “self-identifies” as someone wearing grand clothing, despite the truth his five senses are practically shouting. He was conned into thinking that to acknowledge reality would be to admit he was unfit for his position or “hopelessly stupid.”

Isn’t that what’s happening today? Our culture has fallen victim to a similar con. People who know better have been convinced that to stand for truth is to declare we are hopelessly stupid and unfit to be members of an enlightened society. Let’s face it: no one wants those labels. So people accept that self-identification trumps reality rather than risk being labeled stupid.

Truth is being sacrificed on the altar of moral relativism. Instead of basing perception on the five senses, our culture has decided to base it on emotion—what I’m feeling at any particular moment becomes the temporary standard.

But the danger of allowing emotions to rule leads to greater problems.

“Do what feels good, not what’s right” which then deteriorates into…

“There’s no such thing as right and wrong.”

We are no longer sliding down a slippery slope. We are careening into a yawning abyss—a world devoid of God’s Word and the most elemental levels of common sense.

In “The Emperor’s New Clothes,” it took a child to courageously speak truth. But even in the face of the truth, the emperor chose to embrace the lie and continue the procession. It appears we are following his example.

May God help us.

StumbleUpon
← Prev: Four Benefits of the Best Kind of Honeymoon Next: Fatherhood: How Much Time Do You Have? →

The Rise and Fall of Nations

The Rise and Fall of Nations   It’s been happening for millennia. Countries grow into empires with increasing...