A few years ago, a popular television program called Monk featured a lead character consumed with perfectionism. He couldn’t prevent the murder of his wife, so he spent the rest of his life trying to control everything else.

For a while, my nickname became “Mrs. Monk.” I admit it: I like control. I’m happiest when things are done my way, on my time-table, and to my standards. (Cue lots of sympathy for my long-suffering husband!)

Thankfully, the older I get, the more I’m learning to relax. I’m finally getting over my perfectionism, both physically and spiritually. This is a good thing, since on the spiritual front, perfectionism can lead to performance-based Christianity.

That was the Pharisees’ problem in Jesus’ day. They were consumed with doing everything perfectly right. To ensure their absolute compliance with the Law, they created even more laws. But they focused on externals. Their spiritual life was all about impressing people with their performance. Problem is, they also thought they were impressing God. 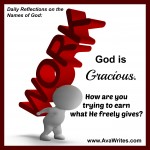 I can be like that, focused on playing the role of the perfect Christian. I forget that God is more concerned with the state of my heart than He is with the stage of my life. As He told the prophet Samuel, “Man looks on the outward appearance, but the Lord looks on the heart” (I Samuel 16:7). I may be able to fool people, but I will never be able to fool God.

Our relationship with God is based on His grace, not our performance. Our salvation is not payment for good behavior, it’s a gift given to us because of Christ’s substitutionary sacrifice. The good that we do is not to earn God’s favor, it’s to thank Him for what He has already done for us.

And that beats a performance-based life every time.

← Prev: Lay Down Your Burdens Next: Tribute to Mothers →