Who are you? What is your gender? Your ethnicity? Nationality?

There was a time, in the not too distant past, when people accepted that certain physical characteristics are unalterable. Of course, we’ve always used tools and techniques to present our physical appearance in the best possible light. Cosmetics, lifts, and hair coloring have been around for centuries.

However, these days we’re seeing a growing confusion about identity, including gender and ethnicity. Recent headlines have boasted of the “courage” exhibited by a former athlete’s surgery to give himself the physical characteristics of a woman’s body.

Other headlines “outed” a Caucasian woman who changed her appearance to appear African-American. No one was the wiser…until her biological parents offered evidence to the contrary.

But the issue of identity confusion goes far beyond societal approval or personal preferences for self-identification. The broader—and more critical—concern has to do with accountability to our Creator.

Does God make mistakes? That’s the message communicated when a man claims he should have been born a woman or when a Caucasian claims to be black.

We are all wounded people. Broken people. Some bear deeper wounds than others. But when we allow those wounds to change the very essence of our identity, we have crossed a critical boundary.

The Bible calls the source of these wounds sin. It is this sin that causes us to deny the goodness of our Creator and seek to recreate—or corrupt—what He has created. The apostle Paul said it this way:

Whether intentionally or unintentionally, changing one’s gender or ethnicity is the equivalent of shaking our fist at God, proclaiming that He made a mistake and that we know better. Of course, this presumes a belief in God. Those who deny His existence justify their behavior as righting a wrong randomly wrought by nature. 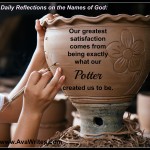 Perhaps a better title for this post is Identity Rebellion, since those who make such changes are in open rebellion to the God who created them. Because the bottom line is this: God doesn’t make mistakes.

Do you believe that?

← Prev: What's It Like Being a Dad? Next: Walking a Tightrope →