Have you ever watched someone live with a terrible situation, and then said, “I could never do that”?

I remember the words as if I had spoken them yesterday. My friend, Betty, was caring for her father-in-law during his terminal illness. He had moved in with them several months earlier.

“I could never do what you’re doing,” I told her with a shake of my head.

“Never say never,” she said quietly. “When God calls you to a God-sized task, He gives you God-sized grace. But He does not give it ahead of time.” 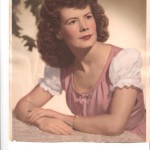 Twenty years later, I found myself caring for my mother-in-law, Nan, at home during her battle with a host of illnesses. She suffered from heart disease, diabetes, lung cancer, and Alzheimer’s disease. Her condition worsened, and it became a daily struggle to provide her care. The sweetness that had characterized her disposition for the many years I had known her appeared to change in an instant. She was suspicious of our motives and our actions. Anger charged her every word and she retreated into a fantasy world where we could not follow.

As hard as this was for me, it was more difficult for my husband to watch his mother transform from a gentle parent into a hostile stranger. We had committed to caring for her at home, but with each passing day, I wondered if we would be able to keep our commitment. The stress of her care seemed to be pulling us apart.

Our care for my husband’s mother was a labor of love and an appointed task from the Lord, but without God’s daily infusion of grace and strength it would quickly become a bitter burden.

Then I remembered Betty’s words, spoken so many years earlier. When God calls you to a God-sized task, He gives you God-sized grace. But He never gives it ahead of time. If there was ever a time when my husband and I needed His grace, it was then. I began to ask God to specifically pour out His grace on us, to give us His patience, and to help me see this stranger who was my mother-in-law through His eyes.

I won’t pretend that life became easy overnight. Nan’s physical and mental health continued to deteriorate. However, our strength always seemed equal to the task. More importantly, I began to see that, as frustrating as the situation was for me, it was even more so for my mother-in-law. Her mind had become her enemy. Past and present often collided without warning, and confusion was her constant companion. When I viewed her through God’s eyes, my heart broke for her. I could not bring physical healing, but I could surround her with love—the one constant in her changing and confusing world.

Some days were easier than others, but most days found me clinging to the Lord for the supply of His empowering love. The only way I could fulfill the task He had given us was in utter dependence on Him. That dependence enabled God to love her through us.

We were privileged to care for Nan until the Lord called her home, eleven years ago this July 17. Looking back, I realize the Lord had, indeed, given me God-sized grace for a God-sized task.

Your turn:
How is the Lord giving you God-sized grace for your God-sized tasks?

← Prev: The Truth, the Whole Truth, and Nothing But the Truth Next: Time to Clean the Filters →